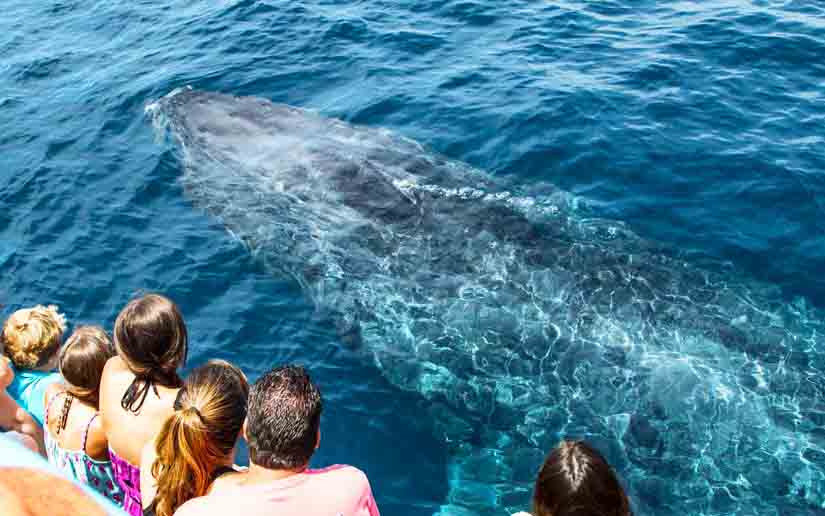 Laguna Beach is known for its beautiful beaches and scenic coastline and is a part of one of the largest marine protected areas in Southern California. The marine protect reserve was put in place to preserve this rich ecosystem and is one of the most diverse in Southern California. Along with huge array of marine life that the reserves attract, many species of whales and dolphin travel in the reserve. This is a wonderful opportunity for whale watchers wanting to view these amazing mammals. Newport Landing Whale Watching offers whale watching cruises daily year round from Newport Bay just minutes north of Laguna Beach. Newport Bay is at the northern most part of the marine protected area which starts just outside Newport Bay and travels south along the Laguna Beach to Dana Point. Whale watching season off Laguna Beach is year round with the summer and fall months viewing the giant blue and finback whales. These giants grow to 90 feet or more and can weigh 200 tons. These whales move into the coastal waters off Laguna Beach to feed on krill (small shrimp-like crustacean). With the abundance of krill whale watchers are in for an added treat of viewing these whales lunge feeding which is quite common. Seeing these giants with mouths opened wide, scooping up huge quantities of ocean and krill is quite an amazing sight. Along with the summer and fall seasons, the winter and spring months celebrates the gray whale migration. This migration involves thousands of gray whales traveling along Newport Beach and Laguna Beach coastlines. Multiple gray whale sightings per each whale watching cruise is common during this migration. Humpback whales, resident finback whales, and even killer whales can also be viewed year round. Mega pods of common and bottlenose dolphin numbering to a thousand or more are also viewed year round as well as the giant Risso dolphin and California sea lion.